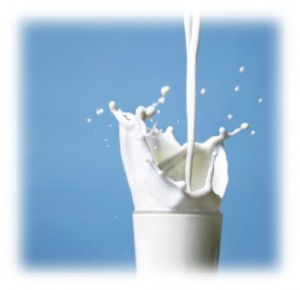 A recent study claims that young adults are not drinking enough milk — at least according to press reports on the matter. But according to the study’s lead author Nicole Larson, the focus on the study was on calcium.

The words “milk” and “calcium” are often used interchangeably in the popular press. But while milk is a calcium source, no standard other than that of the National Dairy Council considers it the best calcium source.

The suggestion that you need to drink three glasses of the secretion of a cow’s mammary glands in order to be healthy is a bit outrageous and doesn’t fit the human evolutionary profile. In fact, most humans around the world cannot easily digest cow milk.

When you measure calcium by cup of food product, milk is high on the list. When you view it by calorie, though, milk is at the bottom. A hundred calories of turnip greens have over three times as much calcium as 100 calories of whole milk.
Sources:

Journal of Nutrition Education and Behavior

The idea that you have to drink milk for strong bones is deeply ingrained – the result of very successful PR by the commercial dairy industry. But what most people do not realize is that pasteurized milk has little to do with strong bones, or good health, for that matter.

In fact, pasteurized milk has no important health benefits at all, and I do not recommend it to anyone.

As stated in the article above, calcium is the issue being investigated, not necessarily the consumption of (pasteurized) milk. The study in question found that during the transition to young adulthood, the daily intake of calcium decreased an average of 153 mg for high school girls, and 194 mg for boys.

Interestingly, time spent watching television was one factor associated with lower calcium intake, whereas an attitude toward a healthy lifestyle was cited as being associated with higher calcium intake. Which makes sense, regardless of the milk issue, since eating vegetables is one of the best ways to ensure you’re getting sufficient amounts of calcium, and is part and parcel of a healthy lifestyle.

Whenever people talk about “milk” they automatically refer to pasteurized milk, which is the only variety you can find in every grocery store in the U.S. However, the drawbacks of drinking pasteurized milk are so many they overshadow any potential benefit from the calcium it contains.

And, in fact, there’s serious doubt about the calcium in pasteurized milk because one of the worst side effects of pasteurization is that it renders much of the calcium contained in raw milk insoluble… This can lead to rickets, bad teeth, and nervous troubles, for sufficient calcium content is vital to children. Additionally, with the loss of phosphorus also associated with calcium, bone and brain formation can suffer serious setbacks.

Worst of all, however, dairy products from cows treated with Monsanto’s genetically engineered bovine growth hormone (rBGH or rBST) could sharply increase your risk of cancer and other diseases, especially in children.

These detrimental side effects are not associated with drinking RAW milk, however.

In fact, raw milk is an excellent source of not only calcium but also a number of other nutrients such as vitamins, enzymes, and beneficial bacteria like lactobacillus acidophilus.

One other significant issue may actually be the species of the cow that the milk is taken from. Milk from older cows, Jerseys, Asian and African cows may not cause problems, while milk from new cows like Holsteins, which has a mutation on one of the amino acids of casein, causes many people to not tolerate it well.

Do You Really Need Calcium for Strong Bones?

This long-held belief may not be as accurate as you’d like to think. Numerous studies have found NO association between high calcium intake and lower fracture risk. As is often the case, modern science may have picked apart and simplified the issue too much.

As Dr. Robert Thompson M.D. describes in his excellent book The Calcium Lie, your bone is composed of at least a dozen minerals, and if you focus exclusively on calcium supplementation you are likely going to worsen your bone density, and can actually increase your risk of osteoporosis.

Dr. Thompson believes that the overconsumption of calcium in the goal of preventing osteoporosis creates other mineral deficiencies and imbalances that will also increase your risk of:

A Surprising Alternative to Calcium for Bone Health

Interestingly, he proposes that one of the best practical alternatives is the use of naturally occurring ionic mineral supplements. He believes that almost everyone needs trace minerals, not just calcium, because you simply cannot get all the nutrients you need through food grown in mineral depleted soils.

According to Dr. Thompson, unprocessed salts are one of the best sources of these ionic trace minerals that are so vital for strong bones (as well as numerous other biological functions).

I have long been a fan of high quality salt, and Himalayan salt is, I believe, one of the healthiest salts on the planet. It contains vitally important trace minerals that are very difficult to get in your food due to the challenges of modern agricultural practices.

Even if you don’t have access to raw milk or other raw dairy products, and have the good sense to avoid pasteurized milk, there are plenty of dietary options to ensure you’re getting enough calcium in your diet.

But first, it’s important to understand that processed foods will produce biochemical and metabolic conditions in your body that will decrease your bone density, so avoiding processed foods is the first step in the right direction.

Aside from that, specific foods that are high in calcium include:

For a more comprehensive list of calcium-rich foods and the amounts of calcium per serving can be found on the International Osteoporosis Foundation’s web site.

Another food worthy of mention is onions. They’re high in gamma–glutamyl peptides that have also been shown to increase bone density.

Grains and soy have numerous health risks, which I’ve discussed in depth in many previous articles. But in addition to all the other negative health effects of grains, gluten has specifically been shown to decrease bone density, so eating lots of breads and cereals is not in your best interest despite being fortified with calcium.

There’s a common concern that eating a high protein diet will secrete calcium into your urine. But the truth of the matter is that more people are now eating low-protein diets, and your body needs protein, because amino acids are part of the bone matrix.

If you don’t consume enough of specific amino acids your body can’t form strong, dense bones. So you DO want to make sure you eat plenty of high quality protein like free-range eggs and grass-fed meats.

Healthy fats — Along with your basic food selections, your omega 3 intake and the ratio between omega 3 to omega 6 has a lot to do with building healthy bone. Unfortunately, even many nutritionists are unaware of the important relationship between healthy bones and optimal fat intake.

Most everyone needs to take a high quality, animal-based omega 3 fat as it is very deficient in most people’s diet. I recommend krill oil, as I believe it’s a superior source of omega 3’s.

And, to further balance out your omega 3 and omega 6 ratio, you’ll want to reduce the amount of processed vegetable oils you consume. Oils like corn oil, safflower- and soy oil are loaded with omega 6’s. I also recommend avoiding canola oil for other reasons.

Sunshine –– Vitamin D is also important for calcium absorption, so along with your raw milk and vegetables, make sure that you are getting plenty of safe sun exposure this summer. Getting your levels up to about 60 ng/ml will help you optimize your bone density.

Exercise — You should also remember that, just as exercise and diet work in tandem to beat obesity, the same can be said for osteoporosis. Strengthening bone mass through weight-bearing exercise, especially during puberty, can build a good foundation that can last a lifetime. In fact, there is a stronger connection between exercise and improved bone density among teens than taking calcium.

This is because bone-building is a dynamic process, and by exerting force on your bones through exercise such as strength training, you stimulate new, healthy bone growth.