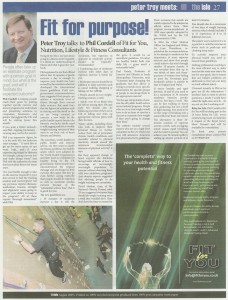 People often take up an exercise program with a certain goal in mind, but what is the goal, and will it facilitate the expected outcome? (By Peter Troy – Troy Publicity)

Phil Cordell is helping people reach their goals by putting together specific exercises and dietary programs for individuals and presenting solutions to companies, businesses and groups throughout the UK and will be visiting Jersey this month. If you want a flatter stomach says Phil – tapping his tummy – running may not be the answer.

Phil is an impressive figure; he is in his mid 40’s but looks ten years younger. “ If you’d like to get up the stairs easier, sit-ups wont help, and if your experiencing fatigue or diabetes for example, eating a low fat diet may make things worse” says Phil with the authority of a man that has studied fitness for many years.

“Are you flexible enough to take on the exercise required?

Is your diet correct to fuel the training sessions and recover/grow?

Are any previous; injuries illnesses, medication, trauma, strength and alignment issues going to impact your ability to keep to the program?

All of these areas require thorough assessment” adds Phil.

Being fit for life is not just about going to a fitness centre regularly it is about an understanding of fitness and what is good for your body. Phil explained to me that official advice that 30 minutes of gentle exercise a day is enough to improve your health has been revised by the scientists who first developed the international fitness guidelines.

Until now, government recommendations have suggested that people can achieve a minimum level of fitness through their normal daily routines. But amid fears that the lightest of activities such as dusting and the stroll to the car are being counted as exercise, a new study by the public health experts behind the formula concludes adults need to add jogging and twice-weekly weight training sessions if they want to cut their risk of heart disease and obesity.

The scientists, world-leaders in public health and exercise advice, say they want to clarify the fitness guidelines for healthy adults which were adopted by the World Health Organization and later used as a template for healthy living by the UK government. Some people have misunderstood the original message and are doing too little exercise, they argue. But they go even further saying explicitly that people should do vigorous as well as moderate aerobic exercise because of the “substantial science base” that it is good for you.

• 30 minutes of moderate exercise a day is still the minimum, but vigorous as opposed to moderate activity should be “explicitly” recommended

• Moderate exercise should be in addition to daily activities such as casual walking, shopping or taking out the rubbish

• People should do two weight training sessions a week

• Adults over 65 or those who are infirm during their 50s and early 60s should also do balancing exercises if they are at risk of falling and draw up appropriate exercise plans with their doctors.

“Many adults, including those who wish to improve their personal fitness or further reduce their risk of premature chronic health conditions and mortality related to physical inactivity, should exceed the minimum recommended amounts of physical activity,” it says. But their apparent change of heart exposes the dilemma facing health officials of how to encourage an increasingly overweight population to exercise without deterring them with over-ambitious programs. Anti-obesity experts suggested that advising people to do weight-training was unrealistic.

David Haslam, chair of the National Obesity Forum, said: “If you suggested everyone here should do weight-training twice a week they wouldn’t do it. ey don’t have the time or money for the gym, it would be an unrealistic guideline. I’d rather see healthy habits built into daily life — gyms aren’t a sustainable habit.”

“Scientists keep changing the goalposts but this advice is trying to provide more specific information for specific groups of people to encourage them to do appropriate exercise”.

“It’s the age-old problem of one-size-fits-all public health advice versus tailored programs. People who are very overweight would have to do an hour of exercise a day just to maintain their weight if they aren’t going to change their diets.”

The authors include several experts who are on a high-level committee in the US which next year will announce America’s new physical activity guidelines. Their revisions this month are widely expected to be adopted as official advice there. Their original recommendations in 1995 were quickly adopted by the WHO and by the UK government in 1996.

In 2004 the Chief Medical Officer for England and Wales, Sir Liam Donaldson, re-published the recommendations in his attempt to underscore the importance of more rigorous exercise and show that people could achieve the total through smaller 10-minute chunks. It was revealed then that up to two-thirds of men and three quarters of women were failing to meet the 30-minute goal.

Scotland’s advice is similar to that in England and Wales.

If you’re healthy and aged between 18 and 65 you need to do a minimum of 30 minutes moderate intensity aerobic exercise, five days a week. This can be fast walking or heavy duty gardening, but not a stroll or light dusting.

You need to be on the verge of breaking into a sweat with your heart rate raised.

The alternative is three 20- minute sessions of vigorous activity a week, such as jogging, which causes rapid breathing and the heart to pound. You can achieve your 30-minute spells by adding up shorter periods of at least 10 minutes.

You should also do a minimum of two days of weight training sessions which should include 8 to 12 repetitions of 8 to 10 different exercises.

The easiest way to achieve it is in a gym but it could be exercises at home such as push-ups and climbing steep stairs, obviously you can hire a Personal Trainer or Fitness Instructor, to advise, coach and assist.

To actively improve your physical health you would need to exceed these guidelines.

Seeking professional coaching is the most efficient way to make sure that the route your take is the one for your goals, also to ensure that any hidden problems are addressed so that you can keep on track without injury.

I listened intently to Phil as he gave me all the information I needed; I had no need to ask the questions, I doubt I would have asked the right ones, am I fit – oh no, not yet, but I working on it!

Phil Cordell of Fit for You will be taking bookings now